"The Xhosa Road to Manhood"

(A shortened version of a presentation we do, on a big screen TV, for guests at River Bend Lodge) 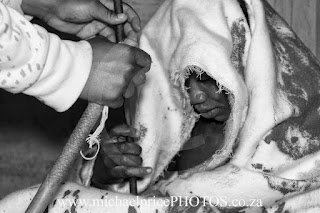 Somewhere between the ages of 18 and 22 (sometimes a little younger) a Xhosa boy’s family, decide that it is time for him to become a man.

This rite of passage takes place mostly in the months of June/July and November/December.

Traditionally the circumcision takes place on a Friday afternoon. The boy’s father will accompany his son out into a prepared area in the bush.
This area is known as iboma, and there will normally be other makwetha’s in the same area – dependent on how many are undergoing circumcision that year. 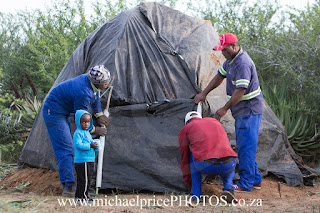 The circumcision is done by a traditional surgeon called an incibi.
No western medicine is used, and no form of anesthetic is applied.
After the circumcision is done the makwetha’s head is smeared with fresh mud made from the earth next to where he was when the circumcision was done.
A bucket of white clay will also have been prepared and this will be smeared all over the new initiates body. Once this has been done, the father, and other male members of the family, will build a structure in which the initiate will stay for his period in the bush. A fire is made inside the structure before the initiate goes in and this is expected to stay alight for the whole period of seclusion.
Once the building of the structure is complete the initiate will be fitted with a loincloth (usually a piece of blanket) and a blanket over his shoulders. Whilst this is being done he will receive instruction on the traditions of how to behave and what is expected of him whilst in the bush.
Once the clay and the mud have dried the father (or nearest male relative) will brush the mud off the initiates head. 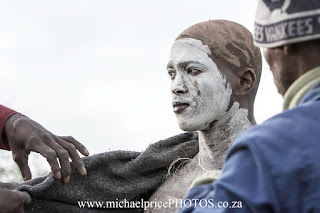 The aforementioned white clay, known as ifuta, is an important aspect of the ritual.
For the first week in seclusion nothing, other than the water that rises to the top of this mixture, may pass the initiates lips. As a result the initiate smear himself regularly during that first week.
The initiates are not allowed any possessions other than a stick and a blanket. Food and other sustenance, which is regulated, are brought to them by a young boy known as a nqalathi.
During the seclusion all the makwetha’s will be attended to by one of the elders of the community who cleans and dresses the wound daily until it is healed. He will also assess when the initiate is ready to return to the community. 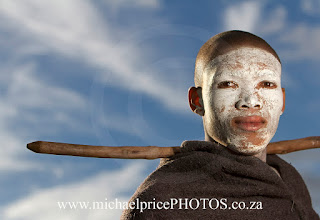 This is known as the umgidi and can be likened to a 21st birthday celebration.
The start of the umgidi takes place early on a Saturday morning when the initiates will wake up very early and await the arrival of the men of his family. He will be sent to wash in the nearest water and whilst he is away doing this the structure in which he has been living will be set alight and burned to the ground. Upon his return he will be naked and own no possessions. His body will be smeared with butter and he will be enrobed with a white blanket with a black stripe. The blanket covers his whole body and he will only see where he is going with the help of the burnt remains of the stick he had with him in the bush being used to open a slit in the blanket. He will thus be accompanied back in to the community with much singing, dancing and mock stick fights. 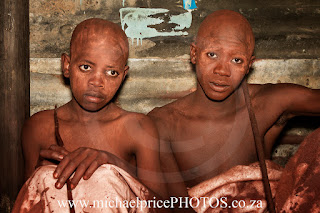 Back at his home the initiate and the nqalathi (who undergoes this last part of the rite with the initiate) are seated on the ground and given instruction by the elders. In the meantime the women will be preparing the homecoming feast.
After this initial instruction the initiates are moved into a small room adjoining the house or in the yard. As the enter this room the nearest female relative will be awaiting the initiate with a handful of red clay (known as imbola) that she will smear all over his head and give the initiate a slap on his face. The initiate and the nqalathi are confined to this room until late afternoon of the same day or early Sunday morning – when they are dressed in their new clothes and paraded around as new men. For six months after this they will smear their faces with this red clay and be dressed in semi formal attire. They are referred to as amakwrala. 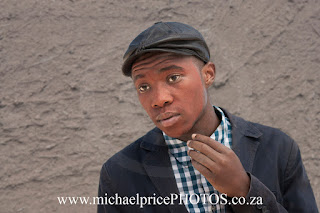 ALL IMAGES THE COPYRIGHT OF www.michaelpricePHOTOS.co.za
and may not be used without permission

For more of these images please visit this Link:

Posted by RiverBend Lodge at 7:06 AM