In addition to our offering of 'An Introduction to South African Wines' at River Bend Lodge we also host Wine Tastings from time to time, and we recently hosted Pieter Ferreira the Winemaker at Graham Beck Wines. 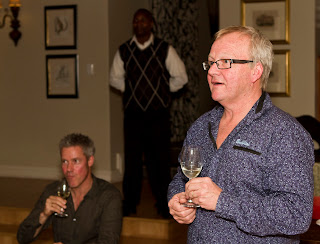 Pieter presented two of the five Graham Beck Wines Method Cap Classique (the name in South Africa for what is known in France as Champagne) four Wines from their new Game Reserve range as well as a Dessert Wine. 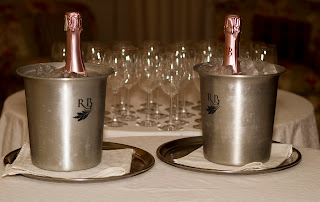 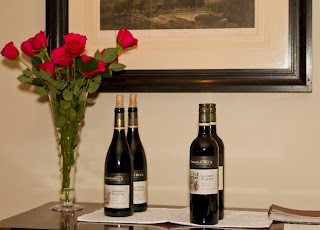 All of Wines tasted were accompanied by a canape prepared by our Executive Chef Kelly Liggett and his team in the kitchen.

Our Wine List philosophy at River Bend Lodge is to provide our Guests with a choice of Wines...many of which are not available in Supermarkets and Liquor Stores. Our reasoning behind this approach is that we try to balance the 'mass produced' Wines with those which are a little less easy to come by because they may be limited, for various reasons, but which express the Terrior of the variety in South Africa.

Guests at River Bend Lodge can call upon our very own Wine Enthusiast to help them choose their Wines or, on request, might wish to learn more about South African Wines by enjoying a presentation of our Introduction to South African Wines accompanied by a Tasting of four Wines....usually two Chenin Blancs and two Pinotages as they both have a uniquely South African story.

Posted by RiverBend Lodge at 2:41 AM No comments:

Caught in the Act!!

On the odd occasion that we have had to tell Guests that there is a water crises, and that it was caused by the Elephants, we are not too sure that we are believed!!

Here is the evidence...on a lovely warm winter's day this young fellow found his idea of how to cool down.......that is, before Darlington came and spoiled his fun! 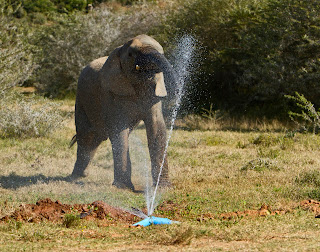 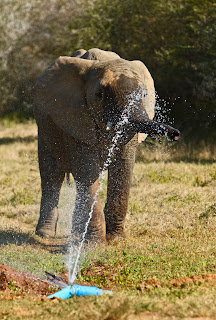 Quenching thirst and cooling down....... 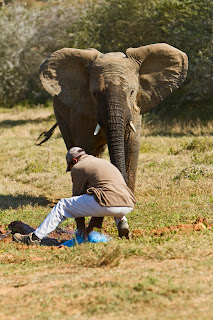 .....until Darlington spoiled the fun!

Posted by RiverBend Lodge at 2:08 AM No comments:

Email ThisBlogThis!Share to TwitterShare to FacebookShare to Pinterest
Labels: Elephant and bust pipe

Is This a Once in a Lifetime Sighting????

One of our Guides Mikey Mouton had the most incredible experience last week...and here is his Blog on this amazing encounter.


"On the cold winter evening of Wednesday the 23th of July at 18h15,  I had the great pleasure of seeing one of Africa’s rarest inhabitants, the Black-footed cat, also known as the small spotted cat (Felis nigripes).
What made this sighting more special is the fact that the animal was very relaxed with my vehicle and that we were able to watch the animal for half an hour.  During this time I was able to take nearly 100 photographs, which is vital to prove to the other rangers that it wasn’t just a prank!
Interestingly Addo Elephant National Park is on the fringes of this animal’s natural habitat, and therefore very few sightings have been recorded in the parks history.
After watching the cat groom itself for what seemed like an eternity (typical cat behaviour!) my guests and I were even lucky enough to see the animal in action, stalking a Scrub Hare (Lepus saxatilis).
Unfortunately, or fortunately (depending on which way you look at it) the hare got away.  After this bit of activity, the cat moved onto the road, where it was briefly interested in its own shadow.  More grooming commenced, and it was off into the grasslands on the next hunt.
After calming myself down for a few seconds, we gradually made our way back to the lodge under the beautiful African night sky, everyone quietly reflecting on the awesome experience.

Black-footed cat (Felis nigripes)
Smallest of the Southern African cat species, its natural habitat is dry, open grassland and scrub with 100-500mm rain annually.  It’s diet includes; rodents, shrews, hares, rabbits, birds, elephant shrews, invertebrates, reptiles and birds’ eggs, an unusual item for a cat.  The hare is a large prey for such a small predator.
The cat is solitary and nocturnal, and shelters during the day in disused springhare burrows, under rock slabs or in holes in termite mounds, from which it gets its Afrikaans name ‘miershooptier’ (ant-hill tiger).
The Black-footed cat is listed on the Red Data Book as rare.

Blog by Mikey Mouton...thank you Mikey. 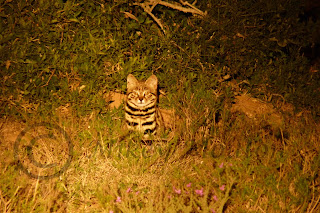 Click on the Image to view a fullscreen version.

Posted by RiverBend Lodge at 4:48 AM No comments: