A Little History and another great Conservation Story 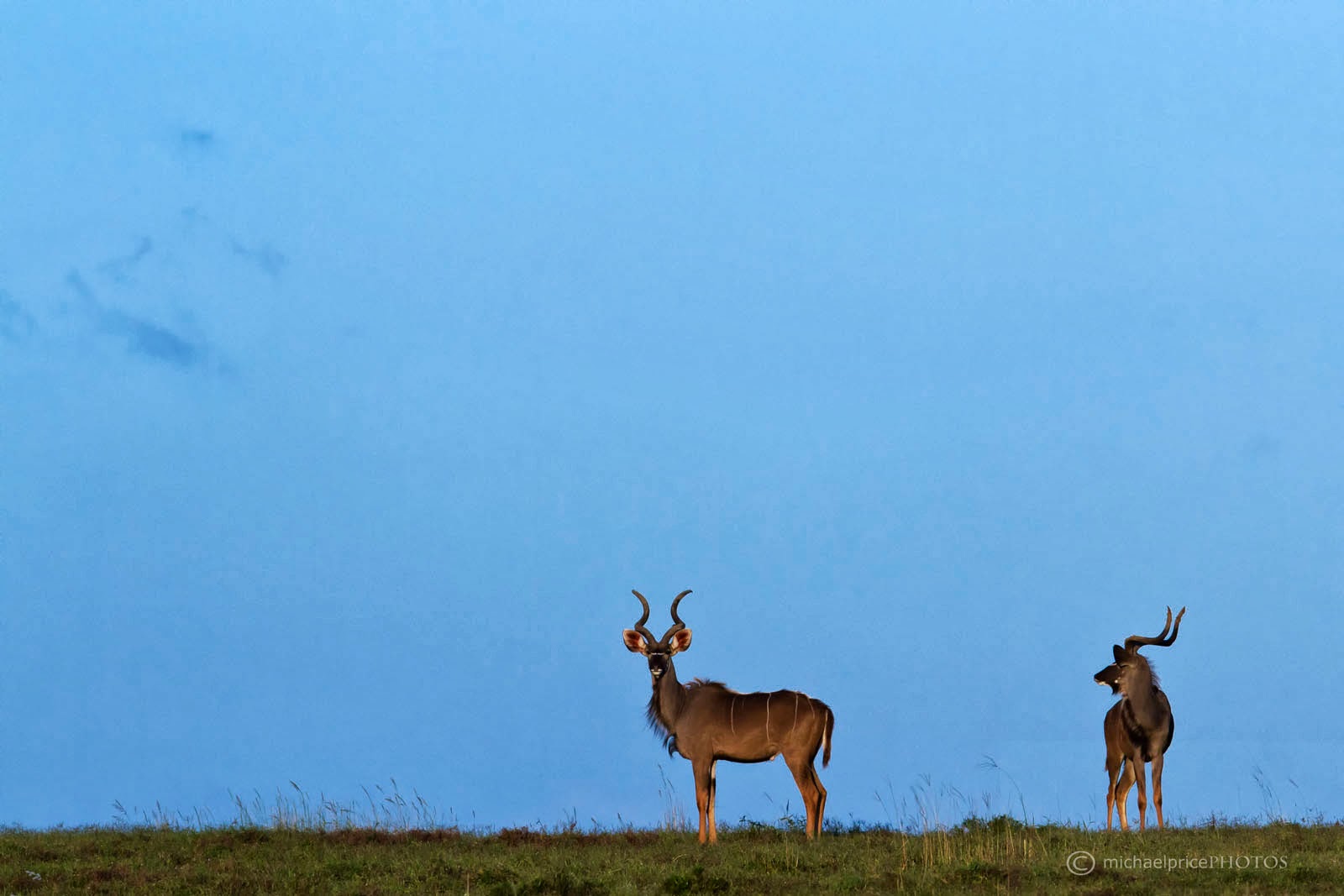 River Bend Lodge was opened in 2000. Until River Bend, and the land on which it was situated, became part of The Addo National Elephant Park in 2003 it was run as a Private Game Reserve.

Over the years we have watched the ecology changing. Some changes were immediately apparent and others a little slower, and suddenly one is more aware of a massive change when making comparisons between various species populations between what they are now and what they were.

One of these massive changes is the population and behaviour of one of the most revered Antelope species in the Eastern Cape....the Kudu. 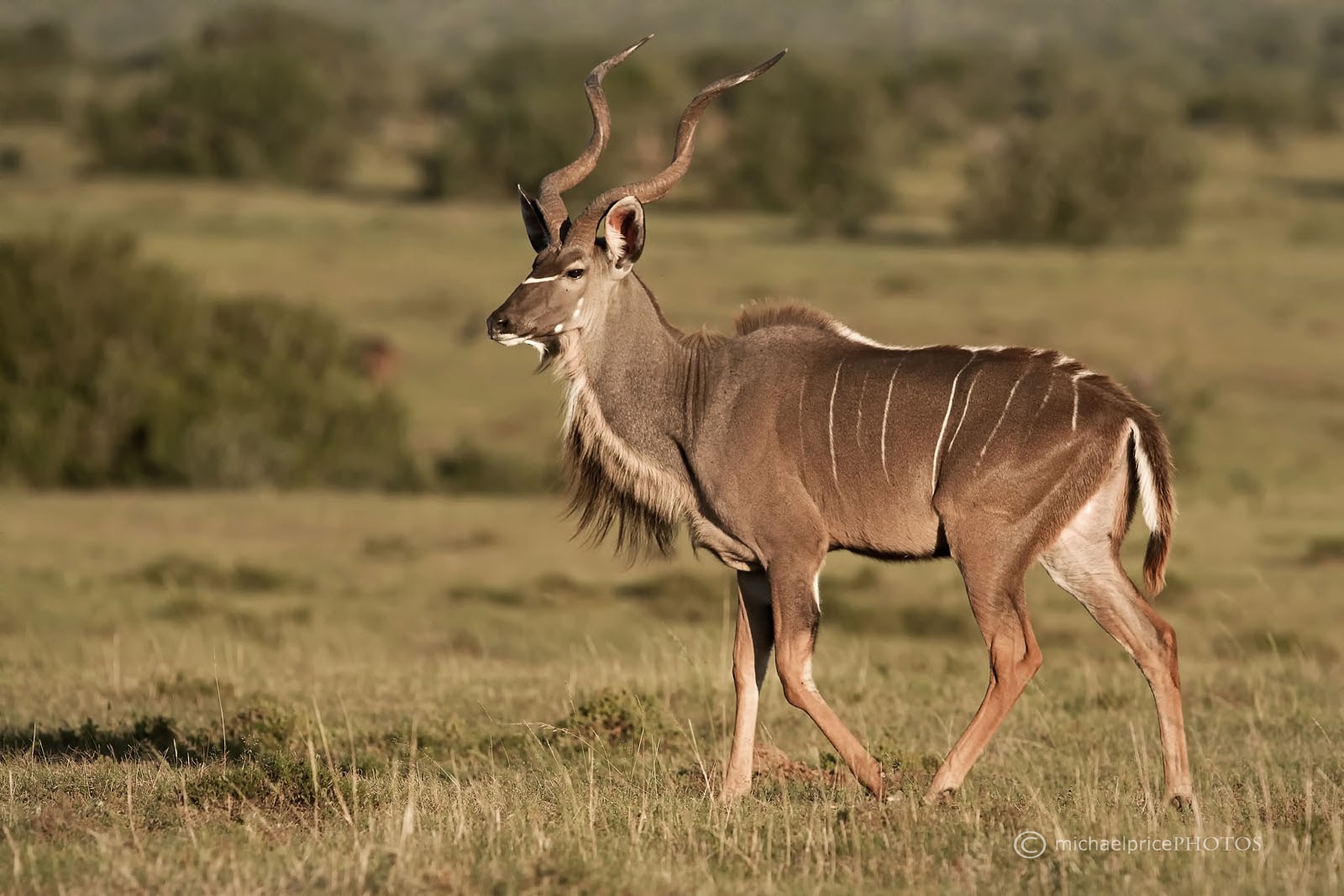 In the early years the sighting of a Kudu between the Lodge and the Main Gate was cause for celebration....a rare sighting indeed. Over the years the population has steadily increased and, with regular traffic, seems to have become much calmer. No longer do we have a "now you see it, now you don't situation"....sometimes they even lie down during a sighting!! So much so that we counted 60 in the aforementioned area a few days ago!! 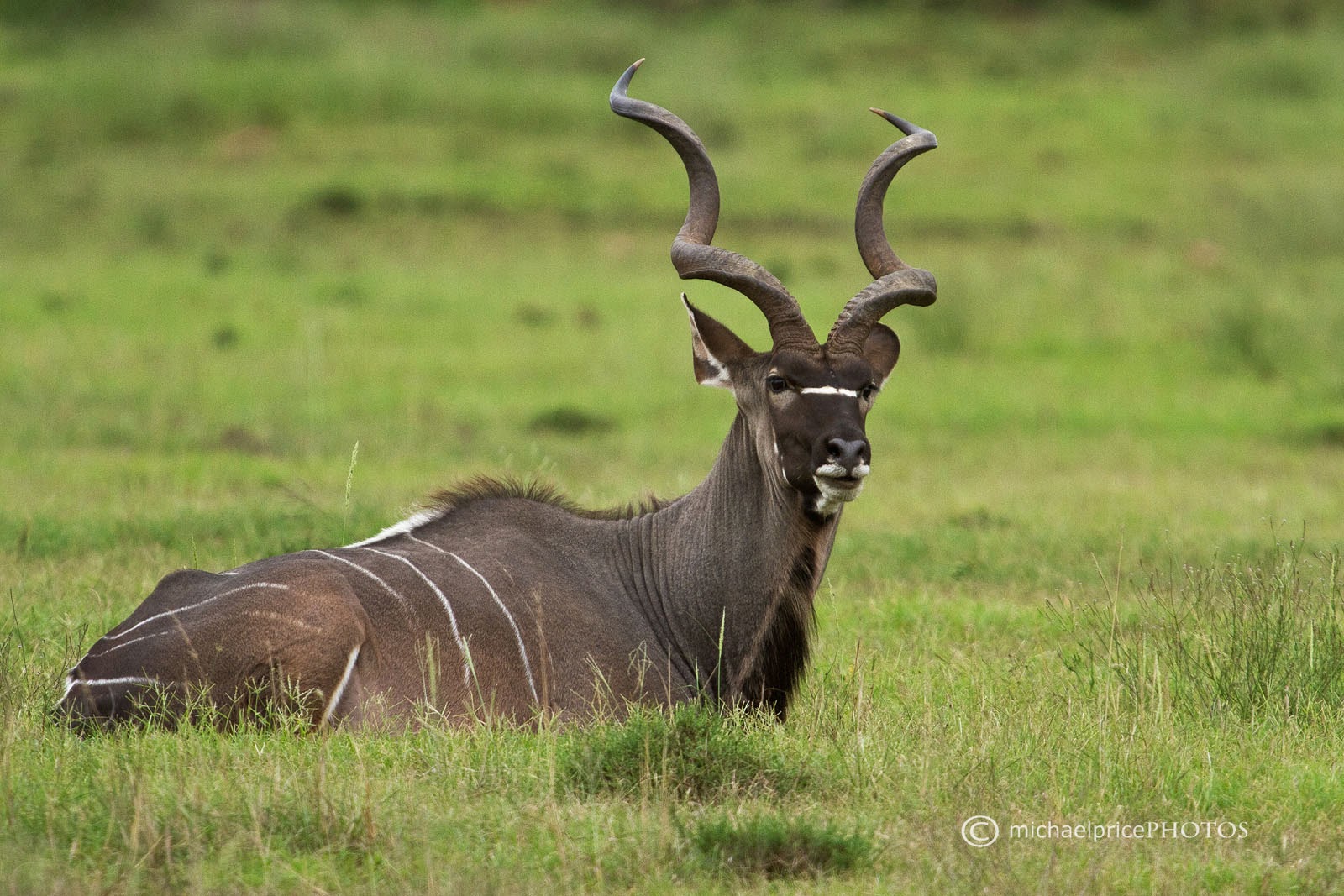 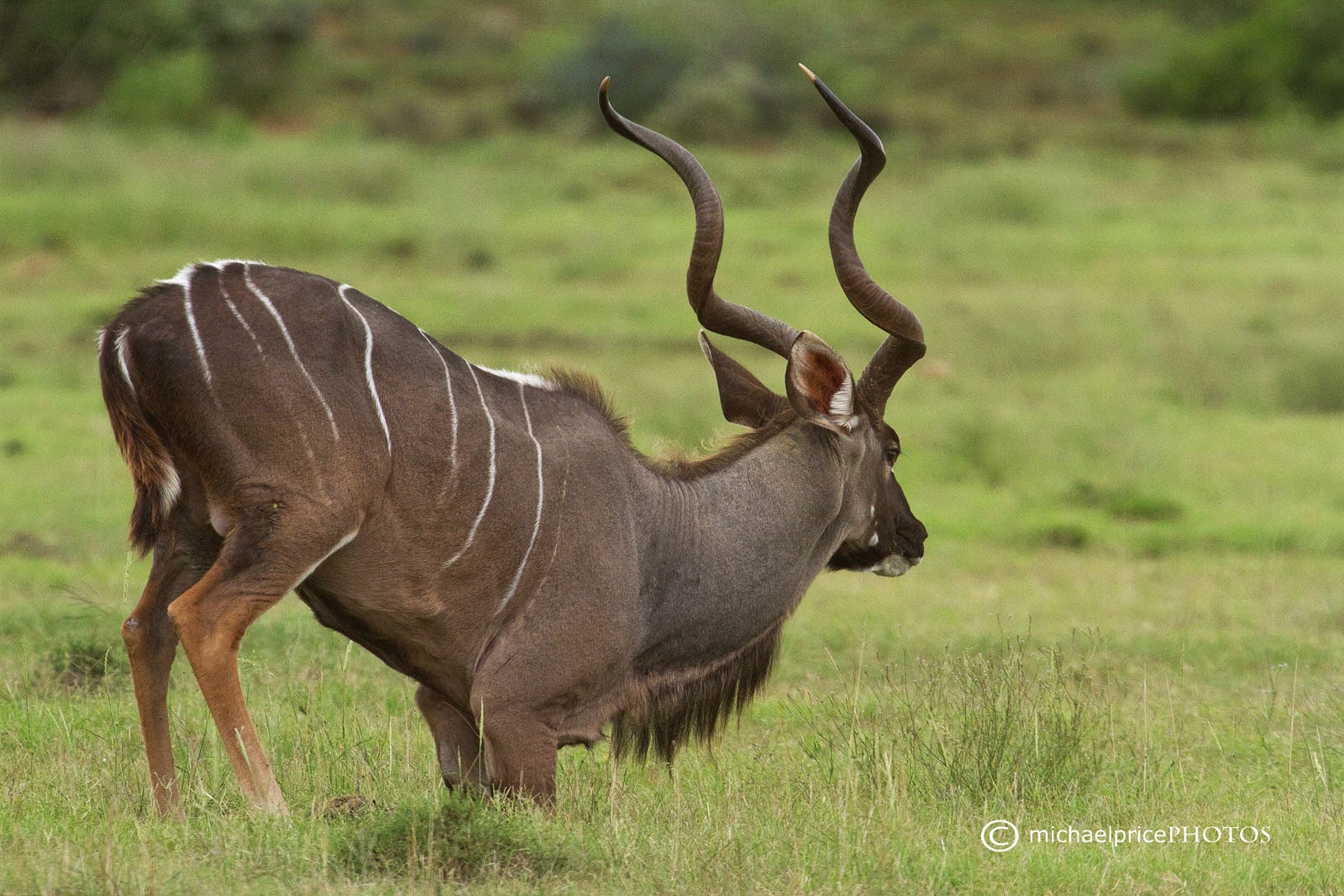 We here at River Bend are just loving theses magnificent beasts. So here is a little information gleaned from Wikipedia.....and some Images for your pleasure.


"The name of the animal was imported into English in the 18th century from isiXhosa iqhude, via Afrikaans koedoe.
Lesser kudus come from the savannas near Acacia and Commiphora shrubs. They have to rely on thickets for protection, so they are rarely seen in the open. Their drab brown and striped pelts help to camouflage them in scrub environments.
Like many other antelope, male kudus can be found in bachelor groups, but they are more likely to be solitary. Their dominance displays tend not to last long and are generally fairly peaceful, consisting of one male making himself look big by making his hair stand on end. When males do have a face-off, they will lock their horns in a competition to determine the stronger puller; kudus' necks enlarge during the mating season for this reason. Sometimes two competing males are unable to unlock their horns and, if unable to disengage, will die of starvation or dehydration. Males are seen with females only in the mating season, when they join in groups of 5–15 kudus, including offspring. Calves grow very quickly and at six months are fairly independent of their mothers. 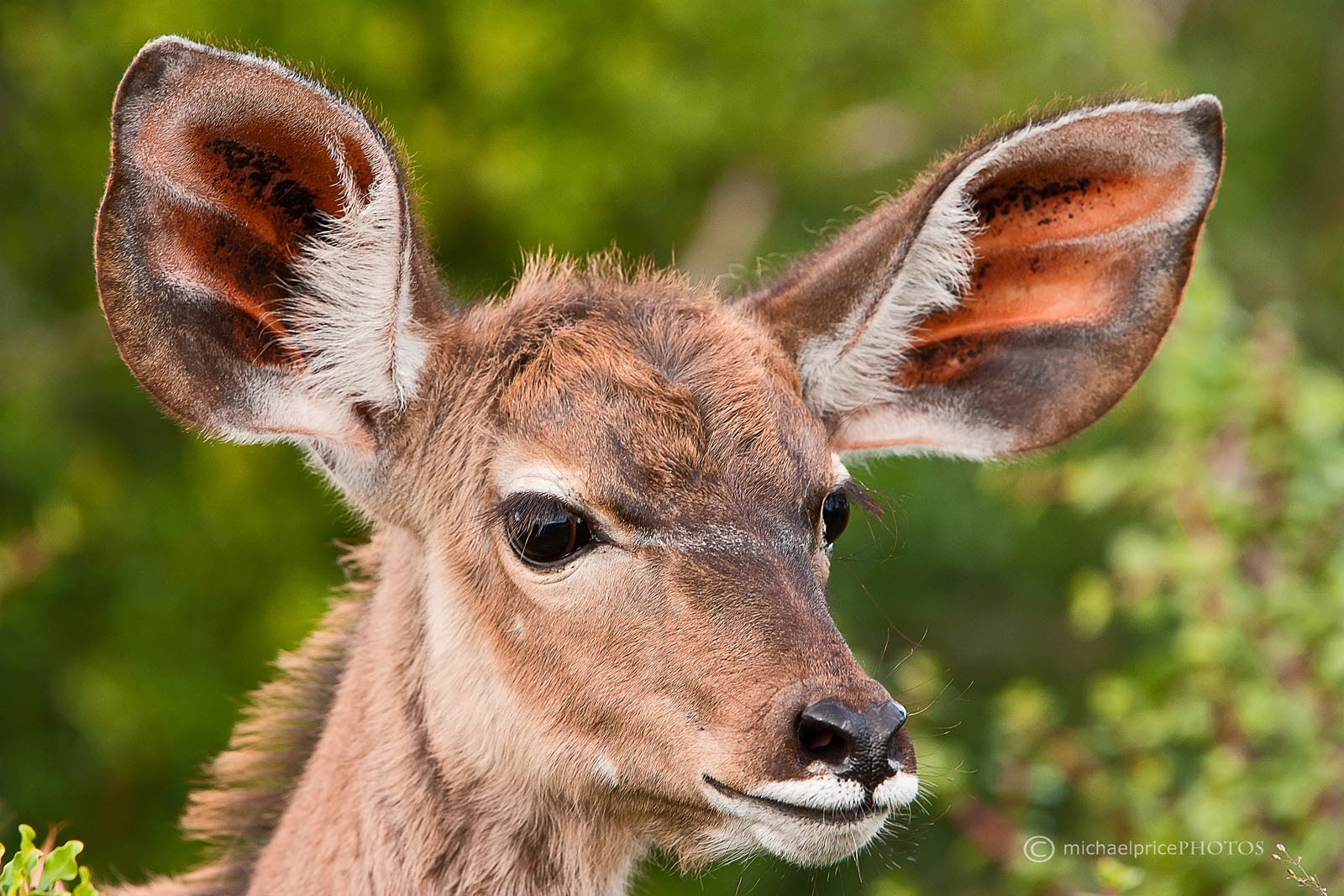 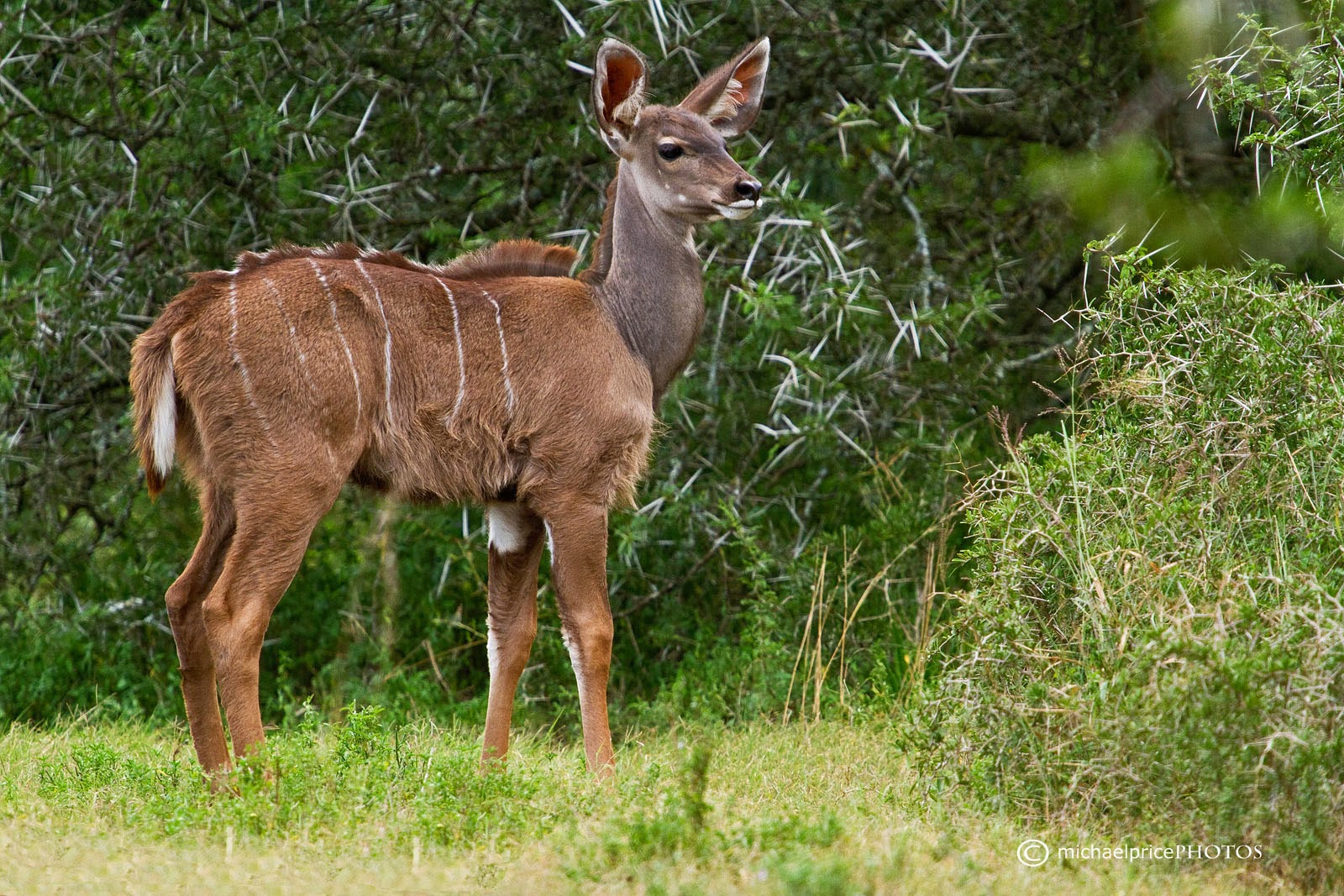 A pregnant female will leave the herd to give birth to a single offspring. She will leave the newborn lying hidden for 4–5 weeks while coming back only to nurse it, which is the longest amount of time for any antelope species. Then the calf will start meeting its mother for short periods. At 3 or 4 months, the calf will be with its mother constantly, and at about six months they will permanently join the group.
When threatened, the kudu will often run away rather than fight. Wounded bulls have been known to charge the attacker, hitting the attacker with their sturdy horn base rather than stabbing it. Wounded females can keep running for many miles without stopping to rest for more than a minute. They are great kickers and are capable of breaking a wild dog's or jackal's neck or back. They are good jumpers and can clear a 5-foot fence from a standing start. 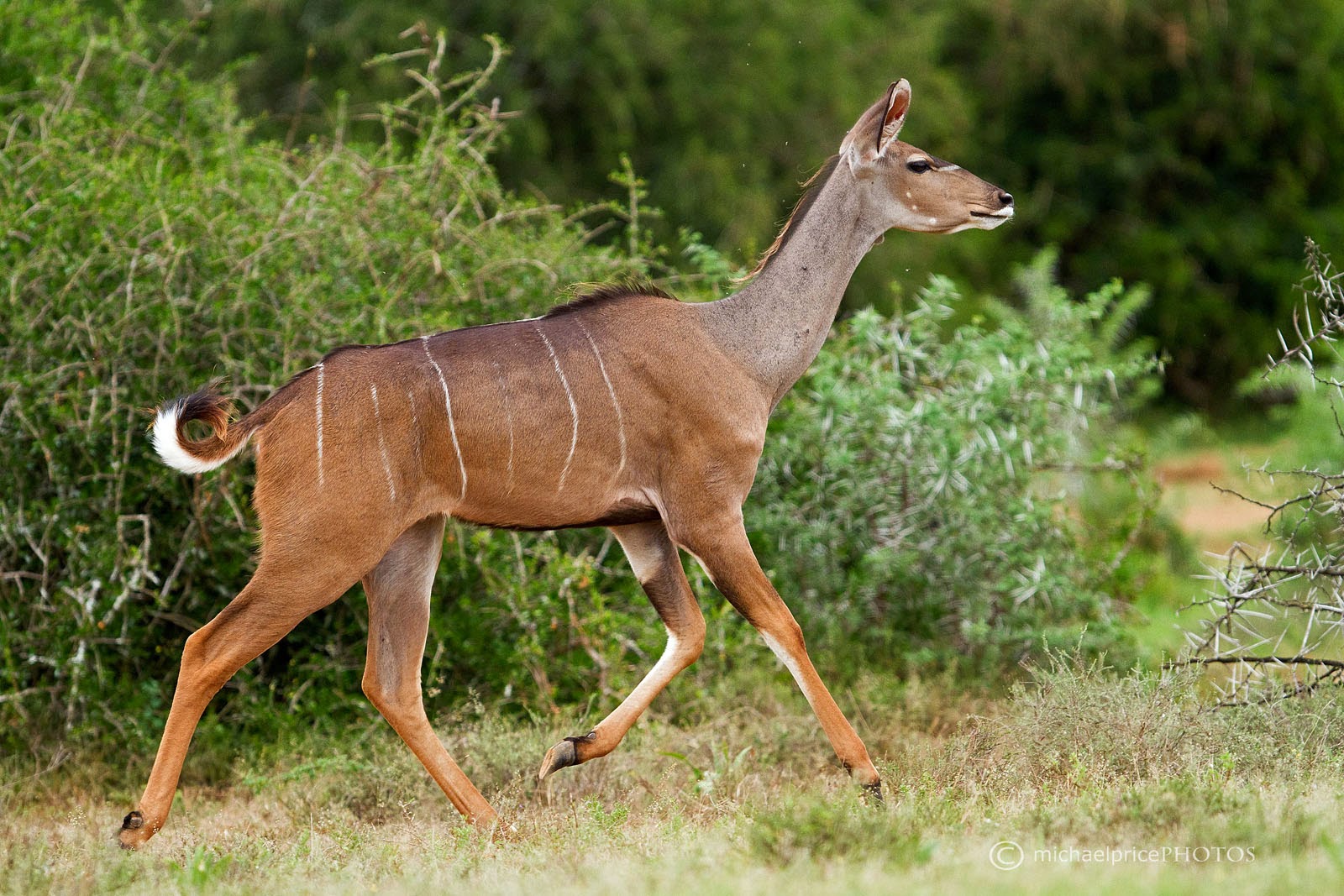 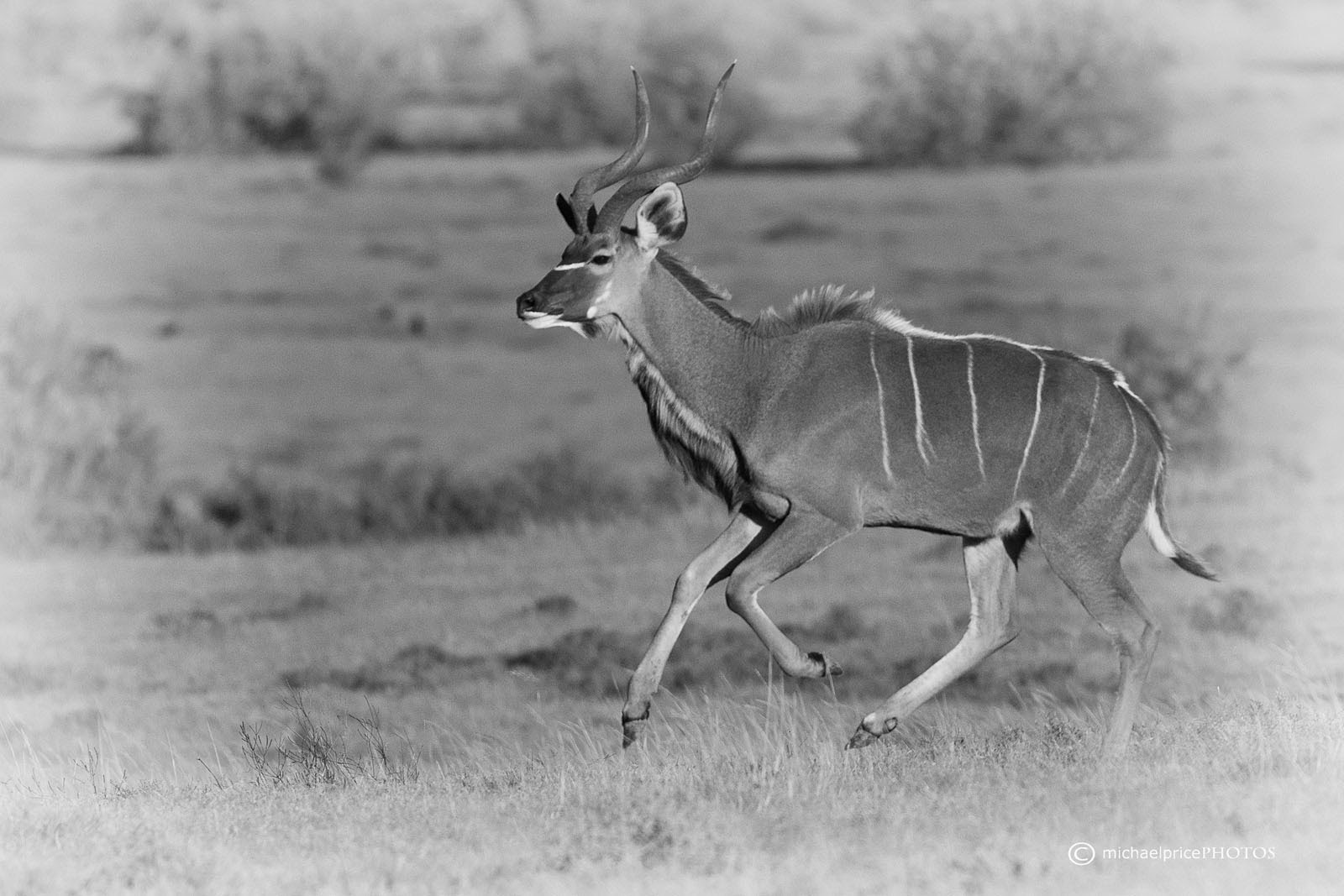 Kudus are browsers and eat leaves and shoots. In dry seasons, they eat wild watermelons and other fruit for the liquid and the natural sugars that they provide. The lesser kudu is less dependent on water sources than the greater kudu.
Many predators, such as big cats (namely lions and leopards), wild dogs, hyenas and pythons, hunt kudu and their young. Kudu numbers are also affected by humans hunting them for their meat, hides and horns, or using their habitats forcharcoal burning and farming.
Kudus were highly susceptible to the rinderpest virus (now eradicated after a vaccination program in domestic cattle), and many scientists think recurring epidemics of the disease reduced kudu populations in East Africa.
Kudus are highly susceptible to rabies in times of extended drought. They have been known to enter farm houses and other buildings when infected. Infected animals appear tame and have a distinct frothing at the mouth. They are fearless and bulls may sometimes attack humans who get too close to them.
Kudu meat is similar to venison (deer), with a slight gamey, liver-like flavor. It is a very dry and lean meat, so it needs to be cooked carefully to avoid drying it out and making it difficult to eat. When prepared correctly, it can be very healthy because of its low fat content." 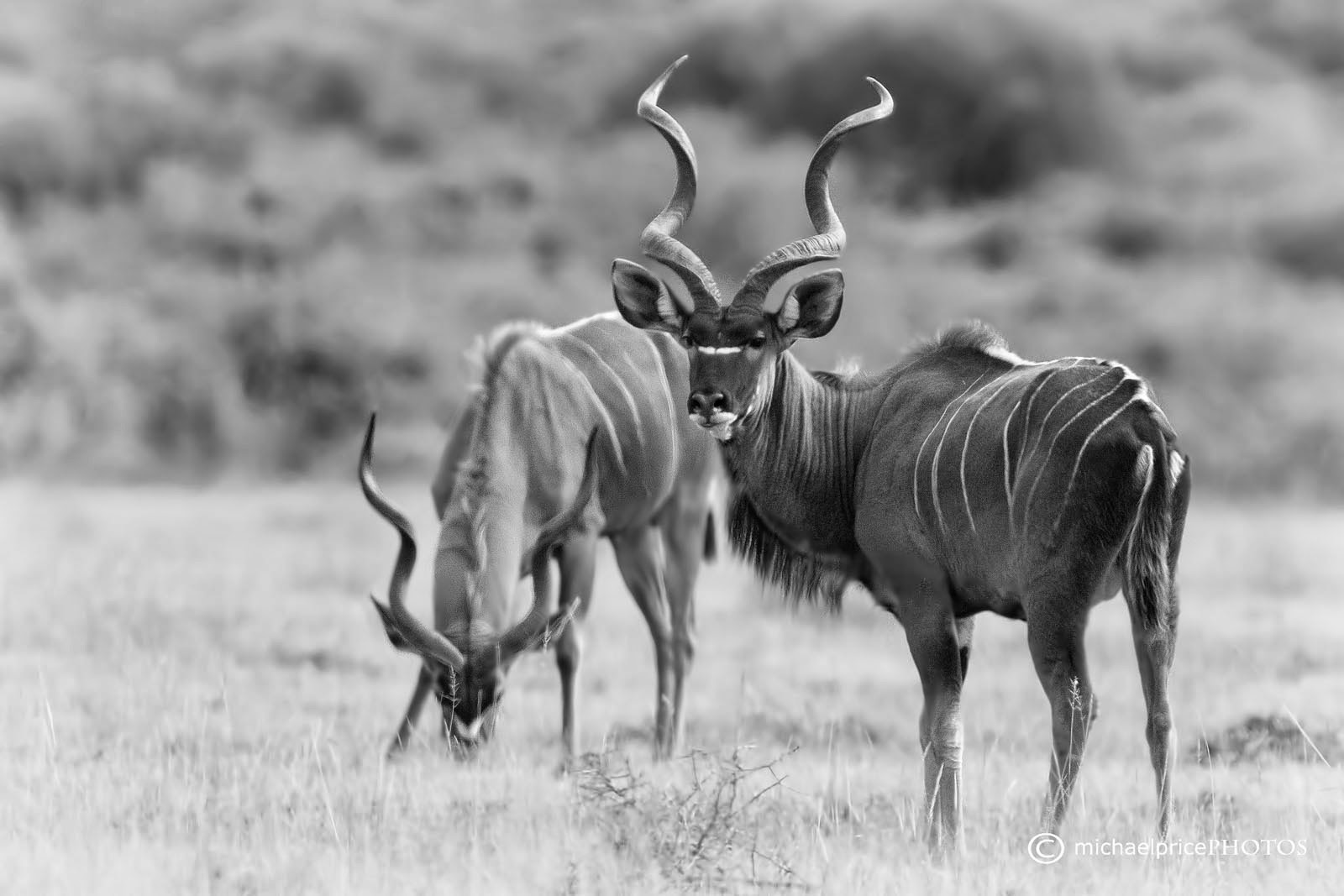 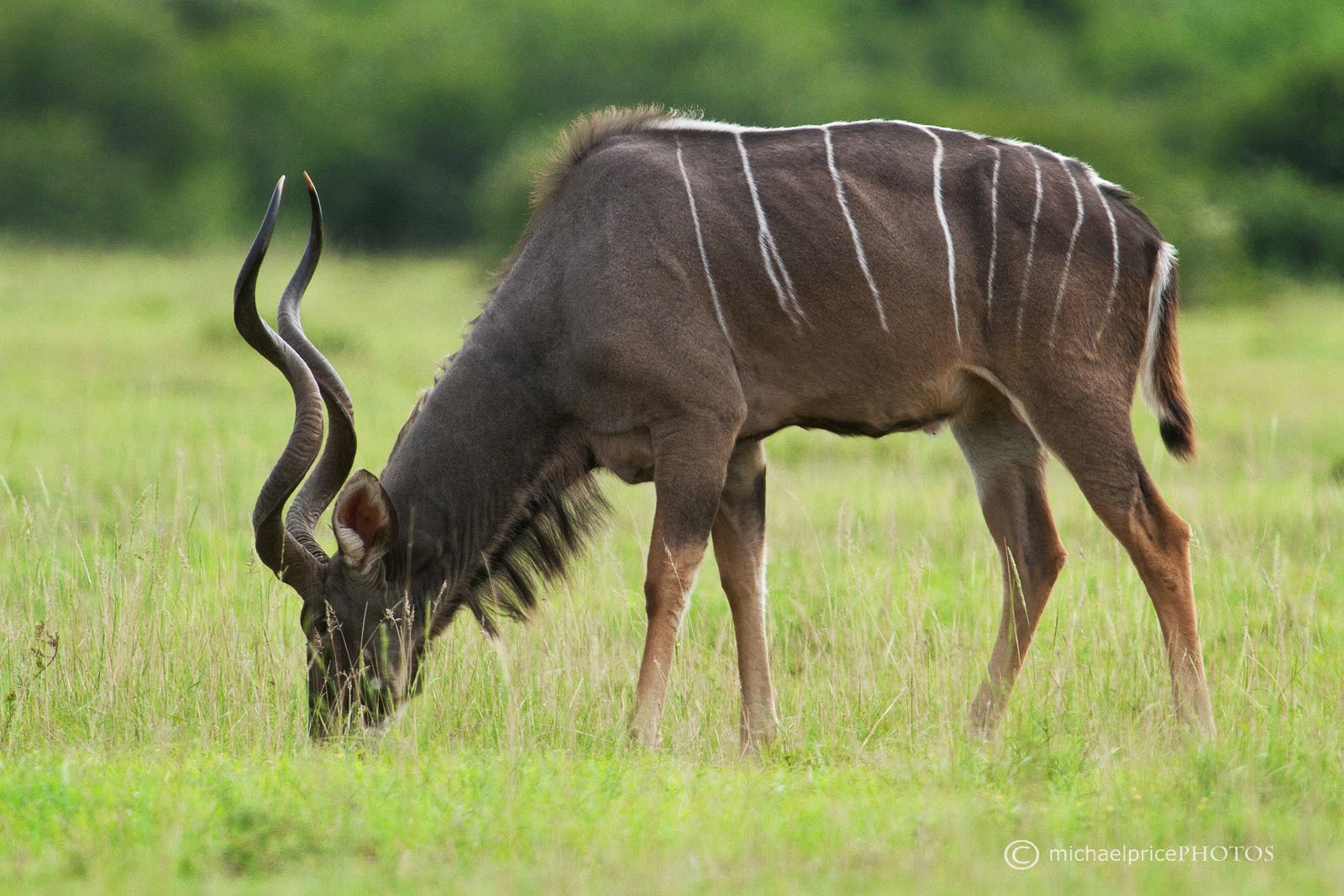 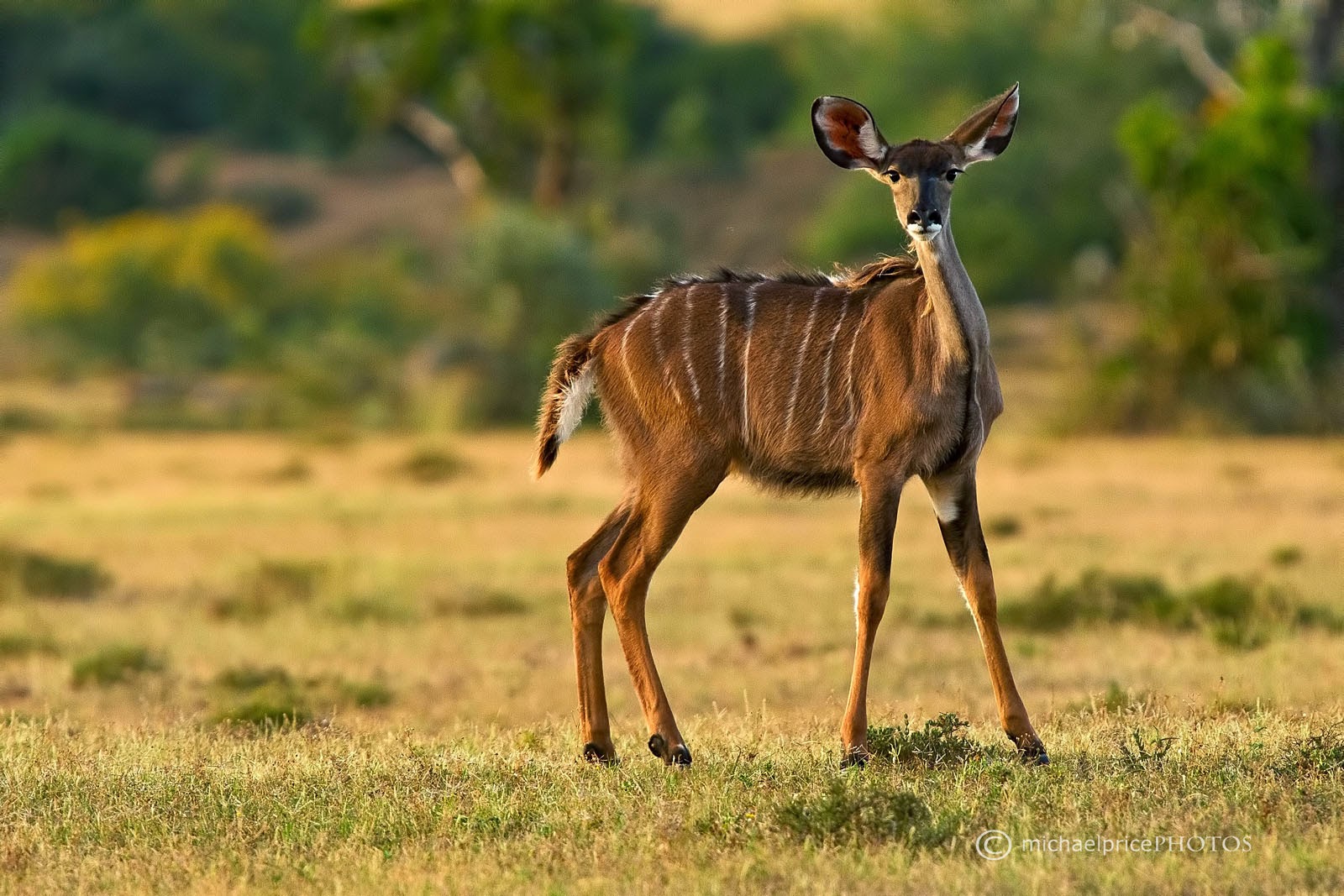 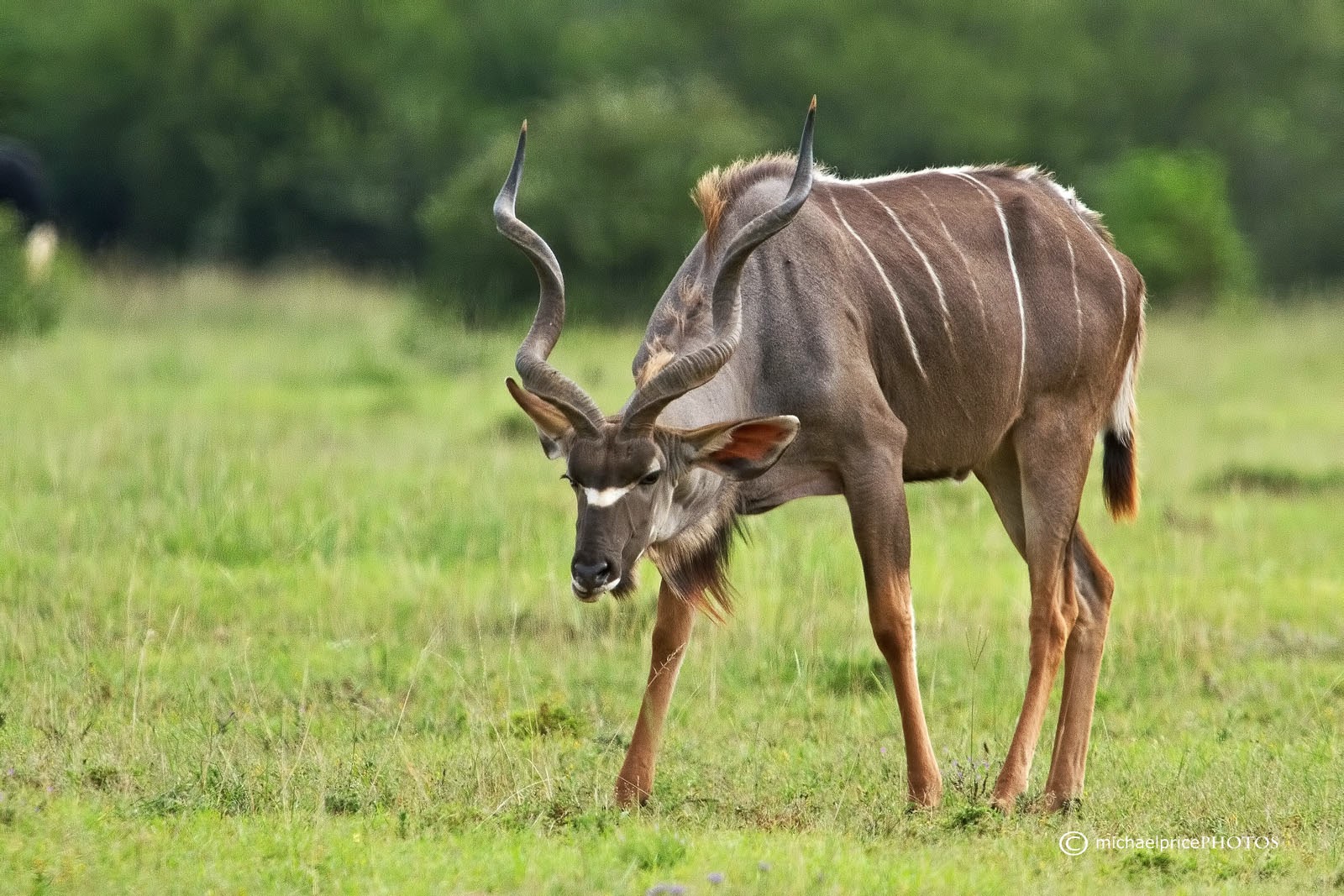 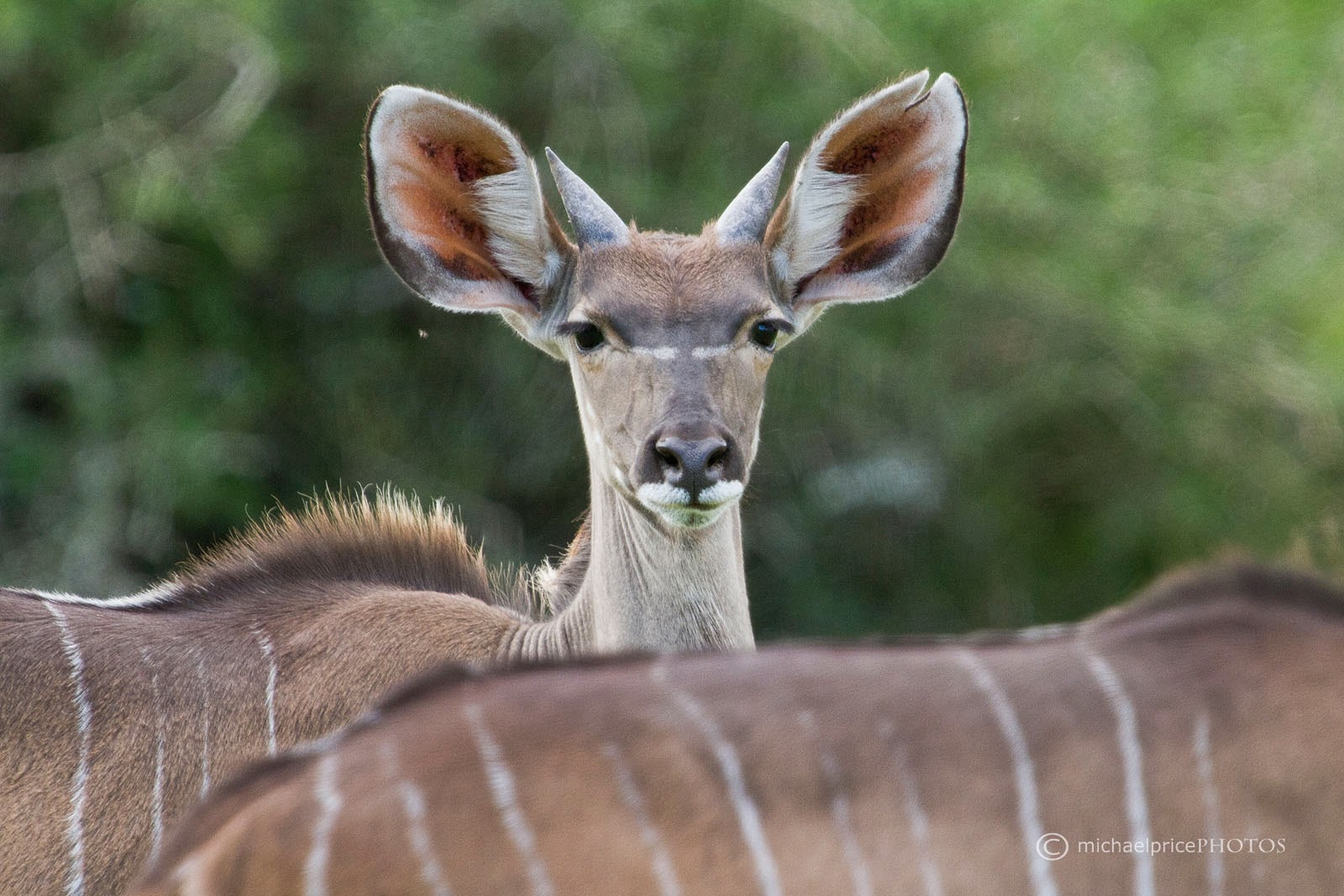 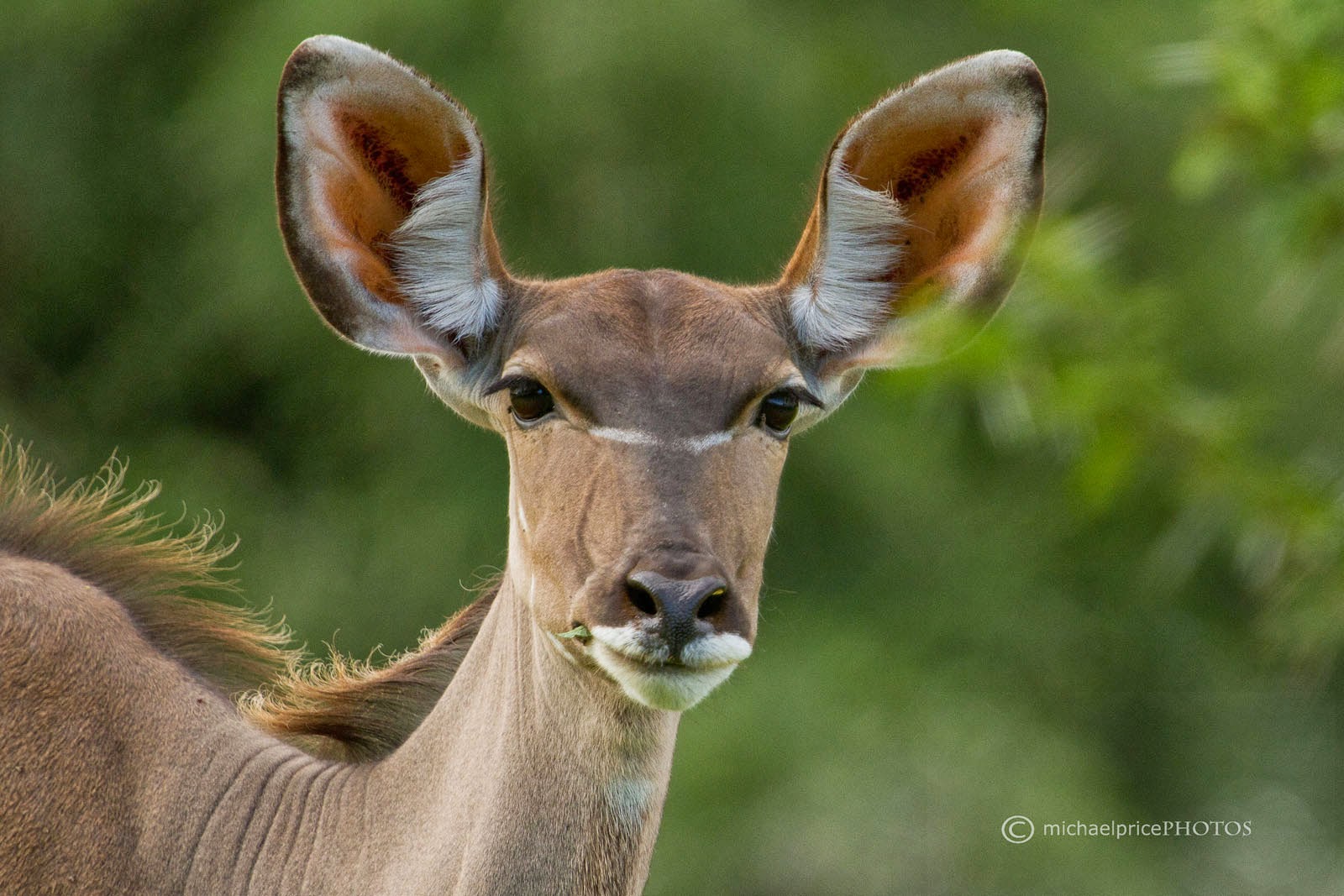 (All Images the property Of River Bend Lodge and may not be used without permission. Click on an Image to view larger versions)