We celebrate Heritage Day on the 24th of September in South Africa. Heritage Day was formerly known as King Shaka Day in honour of the legendary King Shaka Zulu. One does wonder, strict disciplinarian that he was, what he would think of the morality of not only modern day South Africa but the whole World!!

Why am I writing about discipline and morals on this Blog you might well ask? Well, because I had a really special time on Heritage Day. The Elephants surprised us with a visit to the Lodge. The visit came as a surprise because the previous day Darlington had to drive all the way to what we call East Kloof, some 15 kilometres away to find them! It is hot and dry in the Eastern Cape at the moment and the Elephants enjoyed some time at a waterhole…and this is where morals and discipline come in. 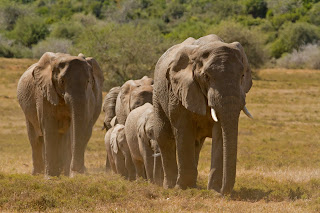 It is very dry in the Eastern Cape....on their way to water

Every time we have these ‘special moments’ with the Elephants on River Bend where we are able to observe from close quarters one understands that all Elephant behaviour is founded on a bedrock of discipline. What a joy to watch the tiniest Elephant calf and the dominant bull in musth, and all ages between cavorting in the same waterhole…to those of you familiar with River Bend it is known as No Name Dam! 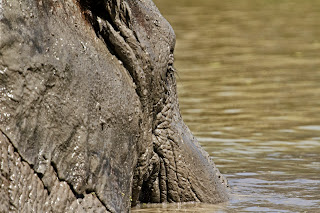 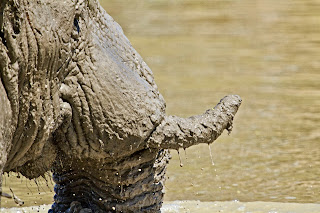 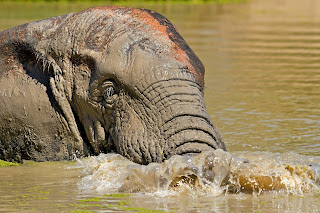 This sub adult male was the first to No Name Dam

We would do well to reflect on the words of Lawrence Anthony in his incredible book ‘The Elephant Whisperer’. He writes…” “Every wild thing is in tune with it’s surroundings, awake to it’s fate and in absolute harmony with the planet. Their attention is focused totally outwards. Humans, on the other hand, tend to focus introspectively on their own lives too often, brooding and magnifying problems that the animal kingdom would not waste a millisecond of energy upon.  To most people, the magnificent order of the natural world where life and death actually mean something has become unrecognizable.” 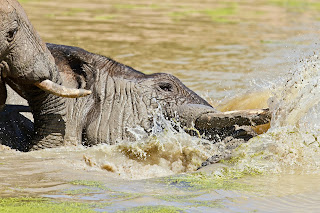 He was soon joined by another... 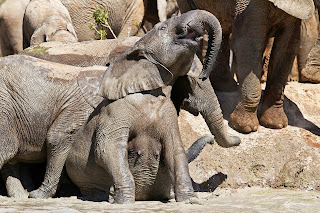 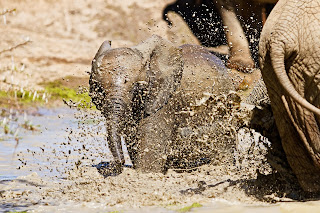 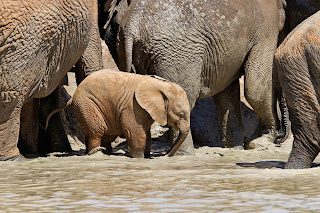 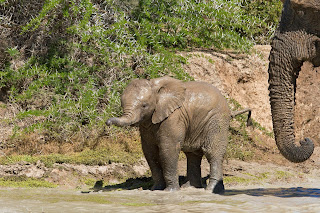 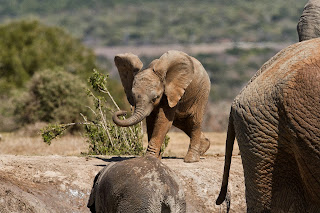 ....others were not allowed and voiced their displeasure.... 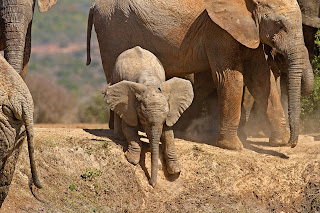 whilst still others thought it a good idea...but changed their minds.

We hope you enjoy these images taken yesterday…Heritage Day, while others were out braaing or just enjoying a beautiful Spring day in the Southern hemisphere. Our Heritage at River Bend includes the sheer privelege of being able to share space with these incredible creatures, a legacy of one of the greatest conservation stories that has ever taken place. May we do the same for the Rhino’s!

TO VIEW A LARGER VERSION OF THESE IMAGES CLICK ON AN IMAGE TO SEE THE SLIDESHOW.

All Images the property of Michaelprice photos and River Bend Lodge and may only be used with permission.
Posted by RiverBend Lodge at 1:32 AM No comments:

A Field Guides View....Spring is upon us!

"Spring is upon us and everyone is excited and waiting in anticipation for all the new arrivals.  Most animals will have their young during this time as the weather is mild, and we usually receive some spring and/or early summer rain.  That means that there is an abundance of food and shelter available for the youngsters as well as the parents who need to care for them.
We have been spoiled throughout the year with new born Elephants and Buffalo, but now it’s time for the flood gates to open!
Leading the charge this year are the ostriches.  We have been entertained by their striking courtship displays for the past month or so, and have been counting the days (average 44 days incubation period) for the first chicks to hatch.  And finally it happened!  On my way back from the ‘bush’ I spotted a male and female with a clutch of 10 chicks, that probably hatched the previous day.  I was lucky enough to get a few shots of the new family taking a mid-morning siesta, a favourite activity at River Bend Lodge.
Ostriches are polygamous animals.  One dominant male will often mate with several females, all of which lay their eggs in the same nest-scrape, but only the dominant female will share the incubation responsibilities with the male.  The alpha female will also ensure that her own eggs are in the middle of the clutch of eggs, rotating the subordinate females’ eggs to the periphery, thereby ensuring her eggs receive the best incubation.  It also serves as added protection from predation.  The (grey) female will often incubate during the day, with the (black) male taking night shift due to camouflage.
Ostriches are not only the largest bird, but also lay the largest eggs in the world.  One ostrich egg is on average the size of 22 chicken eggs, and weigh in at 1.1kg.  The shell is 2-3mm thick.
Ostrich chicks are often called hedgehogs due to their ‘spiky’ down fashioning a resemblance to this small mammal often found in the same range as the ostrich.  This could possibly be a predator deterrent.
We welcome our new arrivals and will keenly be monitoring their development."


Photos by Mikey Mouton
Posted by RiverBend Lodge at 2:15 AM No comments:

Eve has an Aardvark sighting...and we had an interesting Guest!


Eve has left River Bend to broaden her Guiding horizons to include Walking Safaris.....but not before she had this wonderful sighting. Fortunately Eve 'bagged some shots', so we asked her to do a Farewell Blog!

Thanks Eve...and all the very best to you for the future. Thank you for the knowledge you passed on to everyone who crossed your path at River bend Lodge.

"There are a few animals that are so rarely seen in the African bush that when you get lucky enough to see one its like hitting the jackpot!

I was driving out across the River Bend reserve looking for our elephants in the heat of the day when something caught my eye. It was not the usual zebra or kudu which we are lucky enough to see so regularly here at River Bend, but something altogether different. I stopped to take a closer look and on realising what I was looking at I screamed silently inside (so as not to scare the creature away).

It was an Aardvark!! This was one animal that I have dreamed of seeing since I was tiny, they are so elusive and almost only seen at night time in the dark due to their nocturnal nature. It is incredibly rare to see an Aardvark at night so to see one during the day was a complete surprise!

I spent over an hour with this special creature of the bush, as he lay out in the sunshine snoozing on top of his burrow. It was such a special sighting and something I will never forget." 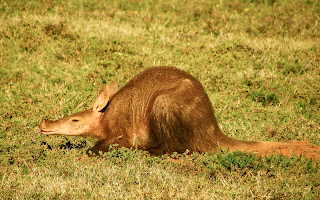 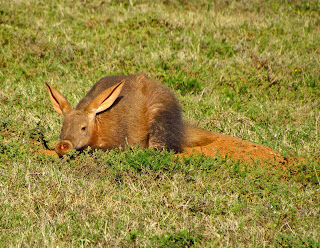 Aardvarks are also know as the African Antbear with its closest relative being the elephant shrew. The Aardvark occurs in Sub-Saharan Africa across savannah, grassland, bushland and woodland habitats. Their diet consists almost exclusively of ants and termites, which they obtain through digging with their long claws and reaching with their snake like tongue.

We hosted an especially interesting person two week ends ago. Scott Ramsay tours Southern Africa every year visiting every SAN Park and tries to visit most Protected areas. Listening to Scott over dinner was fascinating it it is so comforting to hear some 'good news' stories. Scott is truly passionate about the Conservation of Southern (and indeed all of) Africa's very threatened Wildlife. You can follow Scott on his 'Year in the Wild' journey on the following Link:
Year in the Wild Posted by RiverBend Lodge at 7:43 AM No comments: