RiverBend expands its game viewing to include even larger mammals! 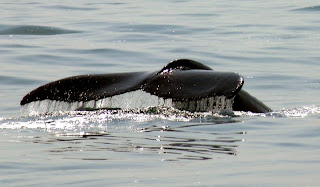 On Tuesday 31 August a group of guests accompanied by their Riverbend guides took the ocean off Port Elizabeth in search of the majestic whales that calve in Algoa Bay between July and October. We were in search of two species of whales that pass by the waters of Port Elizabeth whilst breeding and calving. Humpback whales (megaptera novaeangliae) pass the bay from June until August on their way to their breeding and calving grounds off East Africa and return with their calves from October until the first week in January. Southern Right whales (eubalaena australis) start arriving in the bay during July and leave by the end of October. They calve and mate within the protection of the quieter waters of the Bay.

We were able to locate a Humpback whale and its calf within 30 minutes of leaving the Port Elizabeth harbor. This was a great opportunity for the guests to get close up footage of these two whales and while they were taking photos a pod of bottlenose dolphins (tursiops trancatus) also appeared and were swimming around the whales while jumping and playing amongst themselves.

We then continued towards our destination, St Croix Island where South Africa’s largest colony of African Jackass Penguins (spheniscus demersus) can be found. Amongst these comical penguins we also found African Black Oystercatchers (haematopus moquini), Cape Cormorants (phalacrocorax capensis), White-Breasted Cormorants (phalacrocorax lucidus) as well as Subantarctic Skuas (catharacta antarctica) that were hovering above the boat.

We then headed back towards the Port Elizabeth harbor and were lucky enough to encounter a Bryde’s whale (balaenoptera eden) as well as a Humpback Dolphin (sousa plumbea). Both these species are not often seen so it was with much excitement that these two species were observed.

The experience of not only observing the land mammals of RiverBend Lodge but also those found off our coast was certainly a memorable one. This is yet another example of the kind of well-rounded safari guests can look forward to when staying at RiverBend Lodge.
Posted by RiverBend Lodge at 5:32 AM No comments: 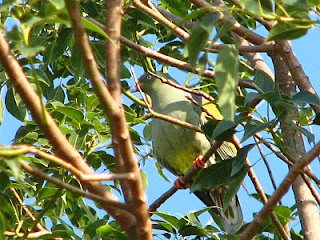 The African Green Pigeon, although common in the Eastern parts of South Africa, is certainly not a regular sight around these parts as its range only extends down as far South as East London according to the birding maps. In fact it does not even appear on the official Addo Elephant National Park bird list. Therefore there was much excitement around the lodge when one of these beautiful pigeons decided to spend the day in the lodge gardens.


They are usually gregarious, all in small groups, which is also makes the sighting of only a single bird rather unusual. They forage in trees, flapping to keep their balance, and often hanging upside down. As you can see in the photo their green plumage makes effective camouflage. When in flight these birds tend to fly straight and direct. These birds being fruigivores would find plenty of fruit bearing tress in the Afro-Montane forests found on the Southern facing slopes on our concession within the Addo Elephant National Park.

Bearing that in mind lets hope to see more of these eye-catching pigeons in the future!
Posted by RiverBend Lodge at 5:23 AM No comments: