A Guest who stayed at River Bend recently highlighted reasons for River Bend Lodge being special….in his own words!

“My parents and I stayed at River Bend for two nights as the highlight of our driving trip around South Africa, and it was a lovely and luxurious treat for us.

The game drives were very amazing, and only with the game drives did I realize how special staying at River Bend is. Beforehand I read how RB has a "14,000 hectare private concession," and I'll be honest, I didn't know what that meant or how that affected me. Ultimately, it means that RB has its own private expanse of land that is still part of Addo Elephant National Park but is only for use by RB guests. All the lions and elephant herds and kudu and the rest of the animals in RB's concession are just for guests. RB also has another 1,000 hectare concession with giraffe that we went to during the last game drive. Going into the public parts of Addo is also an option, and you can definitely tell the difference because in the public parts there are traffic jams around elephants whereas on the private concession we never saw another vehicle. Also, the game driver can go off-road in the concession to get closer to buffalo or a lion kill (which we saw). Our game driver, Steve, was professional and very knowledgeable, and what animals we wanted to see became primary instead of him having a set route that must be followed.

In places of this caliber, you really are paying a premium on service and hospitality over anything. And on that scale, the River Bend is an amazing property where my family felt welcome and well-taken care of from the moment we arrived. My parents and I had two executive suites, which are basically stand-alone cottages. I found the quality of the rooms to be very high. The fact that River Bend only has 8 suites in the main lodge meant that there was an intimate feel and not like it's some huge resort. The view from outside my suite was amazing, and it looked out directly over the public lands of Addo for about 50KM. The bathrooms have a shower and separate tub and his-and-her's sinks. There is a private outdoor shower that looks out onto to landscape, which I did make use of and it was worth it.”

JG325 also had some opinions about our Wine List and our Lunch Menu…..which have been heard and attended to. Thank you.

Last week we posted some of our thoughts on the ongoing slaughter of our Rhino population. Click on the Link above to read a shocking update!!!!

When this article was published 159 Rhino's had been slaughtered in just 95 days!!

We are being led to believe that as a nation - the Vietnamese are the biggest market. 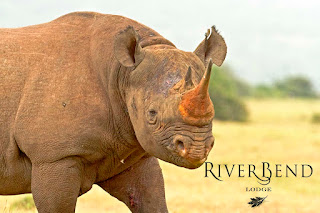 (Photograph from the archives - not taken at River Bend Lodge.....but it does illustrate the beauty of this vulnerable animal which is being killed for nothing more than what makes up our fingernails!!)

Posted by RiverBend Lodge at 11:43 PM No comments:

Although we have had the odd rare sighting......this is the first time we have captured the 'Near threatened' Red - Billed Oxpecker on camera, to prove their existence!!

These birds were re introduced by SAN PARKS around 10 years ago after they were all but wiped out from being poisoned by the dip cattle farmer's used to dip their animals. We are happy to report that they are once again being spotted and seem to be increasing in numbers!!

Unfortunately the light was really bad so our image is not of the best quality. We have included some other images of the breeding herd of Buffalo which came past River Bend Lodge late yesterday evening - the pair of Red - Billed Oxpeckers accompanying  them. 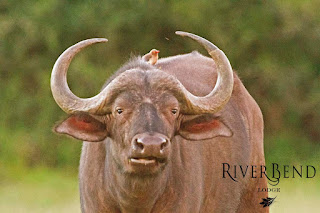 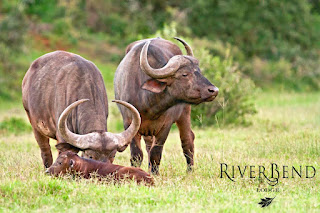 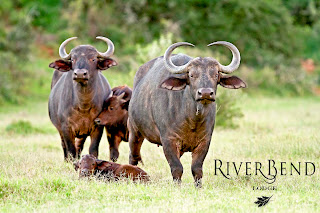 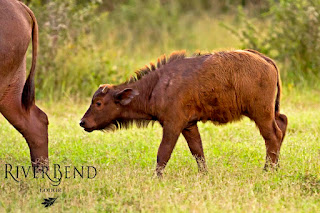 (Click on an Image to enlarge. All images the property of River Bend Lodge and michaelpricephotos and may only be used with permission.)

Posted by RiverBend Lodge at 12:28 AM No comments:

Today we post some photographs of typical Zebra behaviour. 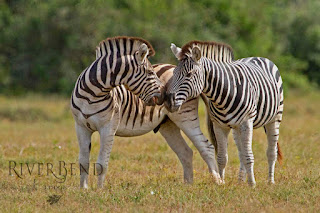 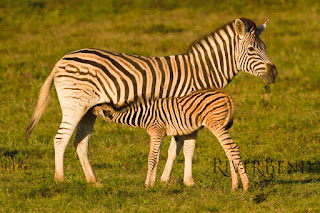 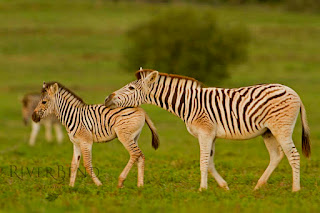 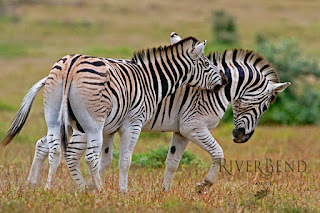 Posted by RiverBend Lodge at 2:22 AM No comments: